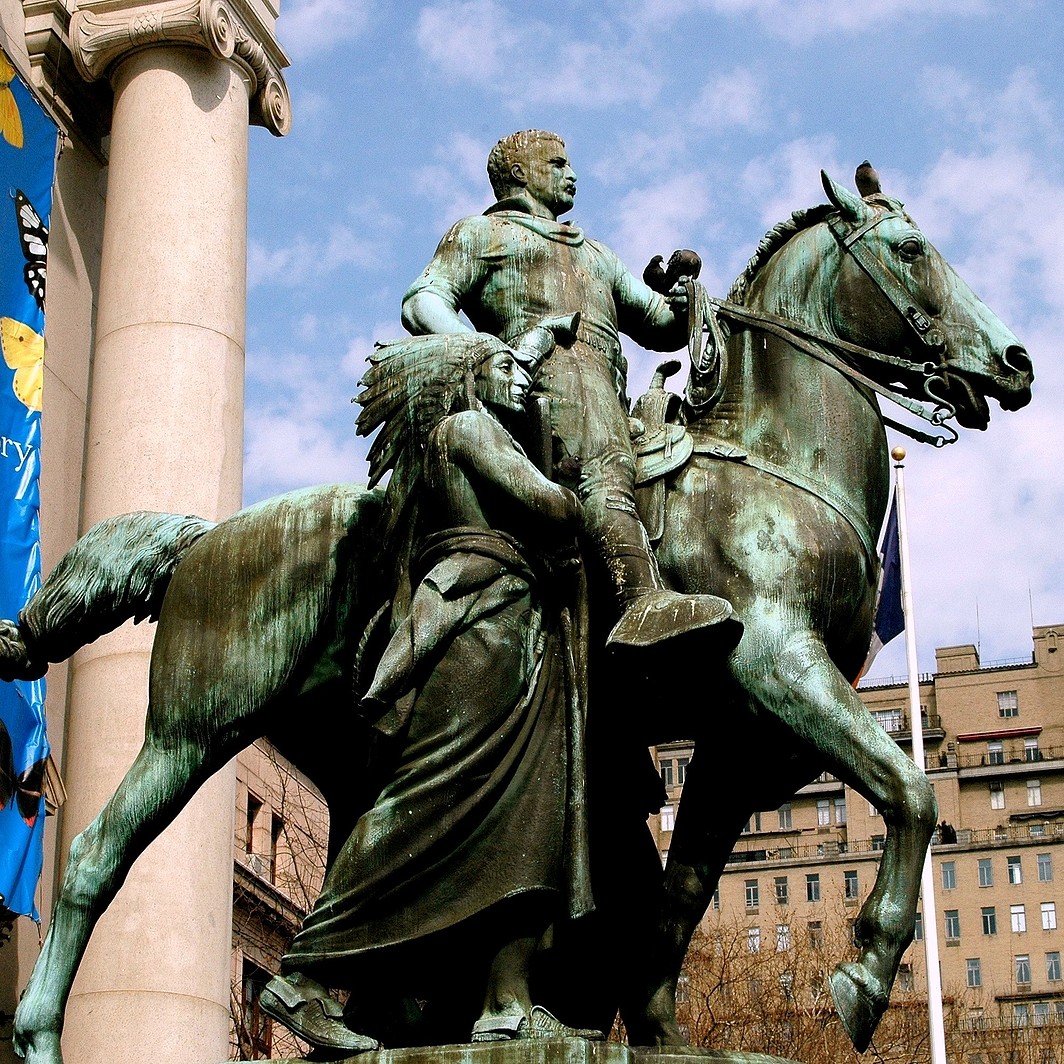 In January this year, the controversial Theodore Roosevelt statue was removed from the entrance of the American Museum of Natural History (AMNH). The bronze sculpture will remain out of public view for about four years before it goes on display at the new Theodore Roosevelt Presidential Library in Medora, North Dakota, which is scheduled to open in 2026. Fine Art Shippers was one of the companies approached for the professional assessment of the relocation of the statue, given our experience with similar large-scale projects. While the debate over the positioning of the monument and building a narrative around it remains a sensitive issue that will ultimately determine its future, we would like to take a look at the history of the sculpture.

The History of the Theodore Roosevelt Statue

Officially titled “Equestrian Statue of Theodore Roosevelt,” the sculpture was designed by James Earle Fraser and placed at the entrance of the museum in 1939. It portrays the former president with two shirtless men on either side of him, an indigenous person and a sub-Saharan African. Both the sculpture and the pedestal were made to match and complement Henry Bacon’s neo-classical architecture.

As was common in public sculpture of the time, the walking figures were intended to represent continents rather than individuals. Later in the 20th century, the Roosevelt statue came to be regarded as a symbol of colonialism, racism, and oppression. Since the 1970s, it has been a regular target for activists. In the past few years, there have been attempts to cover it up and paint over it. According to The New York Times art critic Holland Cotter, the statue has become one of the most controversial monuments in New York City.

In 2017, a city commission reconsidered the statue along with three other memorials, sparking debate about its appropriateness. Back then, a decision was made to leave it in place, which only prompted further arguments. In 2019, amid the controversy, the American Museum of Natural History organized the exhibition “Addressing the Statue” dedicated to the complex issues of Theodore Roosevelt’s legacy. It was in June 2021 that the New York City Public Design Commission finally decided on the fate of the monument, voting for its removal. And in November, the commission announced its new home: Presidential Library in North Dakota where it will be reevaluated and recontextualized. The removal process which took several months and cost around $2 million, according to the museum’s spokesperson, was completed in January this year.

Under the long-term loan agreement between the New York Public Design Commission and the library, the statue will be kept in storage until the library’s opening. In the meantime, an advisory board comprising indigenous and African American people, researchers, and artists will work together with the Roosevelt family to determine the appropriate narrative about the monument and the legacy it represents.

The Roosevelt statue is one, although significant, case in the debate around public sculpture. (Thus, several statues of Thomas Jefferson were destroyed or removed between 2020 and 2021, monuments in Georgia and Oregon among them.) Re-evaluation of artworks, as well as their role in the past and the present, is a complex process built upon post-colonial discourse and ongoing transformations in society.