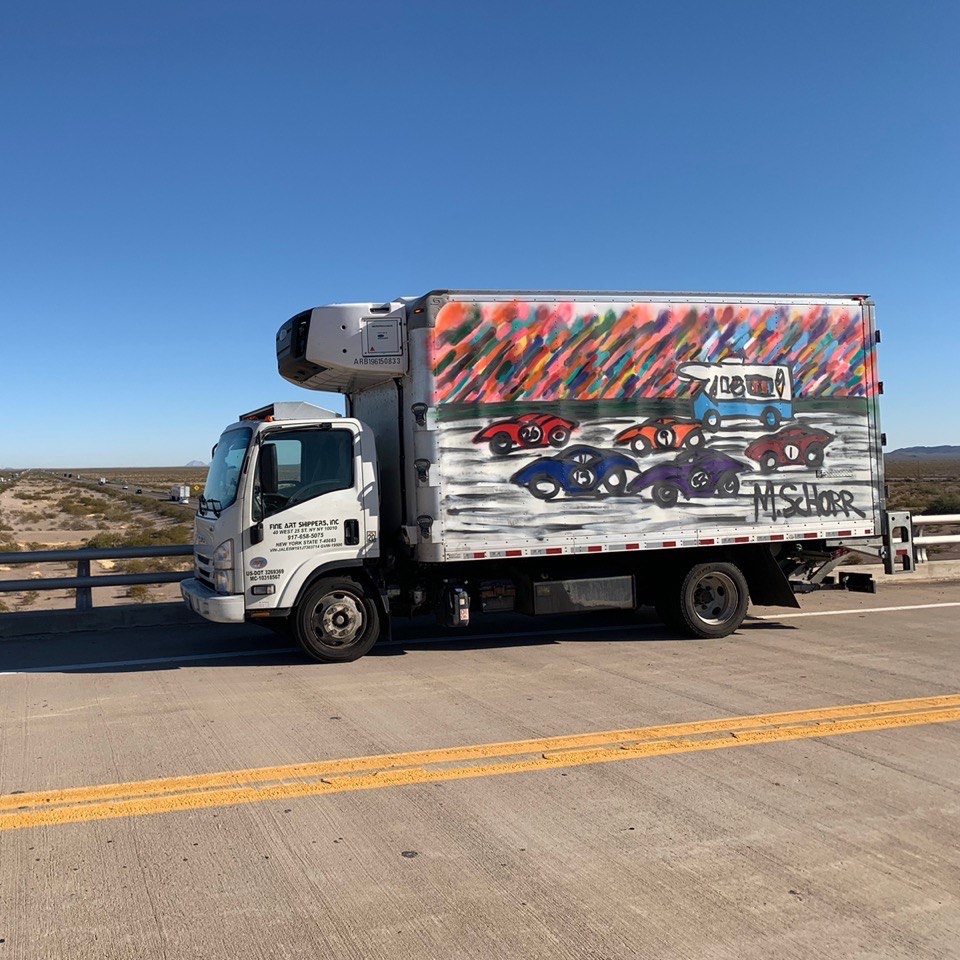 Mitchell Schorr, a celebrated New York City-based mural painter known for his famous “Da Race” series and a long-time friend of Fine Art Shippers, has created a second piece of art for our company. This time, he has painted one of our long-distance trucks, adding to his previous work on one of our art shuttle vans which he painted about a year ago.

“I view it as a conceptual art piece: artwork that transports art and brings it to every new location it is in,” says Mitchell Schorr.

To have one of our trucks transformed into a mobile canvas by a great artist is truly an honor. Mitchell’s unique and vibrant style perfectly captures the energy of our company. Like his signature cartoon-like “Da Race” cars, we are always in motion, happy to deliver for our clients, making their experience seamless, joyful, and memorable.

Keep an eye out for our truck covered in Schorr’s art as it travels across the United States. Like Mitchell, we believe that art is created to bring happiness to as many people as possible. If you see it on the road or parked somewhere, snap a picture and share it online. Join us on this adventure!

For over 20 years, Mitchell Schorr has been creating 3D murals in and around New York City parks. He has also painted large-scale murals in other locations such as “Da Race to the East” in Hong Kong (2015), and “Da Race to NYC” which was painted live at Rockefeller Center for Ferrari in 2017. He has completed commissioned mural works for GM’s headquarters and other big companies.

Schorr’s artworks have been displayed in over 150 venues worldwide, and one of his paintings is part of the permanent collection at the Detroit Institute of Arts. In addition, his artwork was featured in the film “New York, I Love You,” which starred Ethan Hawke and Julie Christie.

Articles about him and his art have been published in media outlets such as The Washington Post, The New York Times, and ArtNews.

Earlier, we talked with Mitchell about the origins of his art, his life as a native New Yorker, and his prolific work around the world. Read our interview with him for a first-hand account of what it takes to be an artist and why it is important to preserve a connection with your inner child.