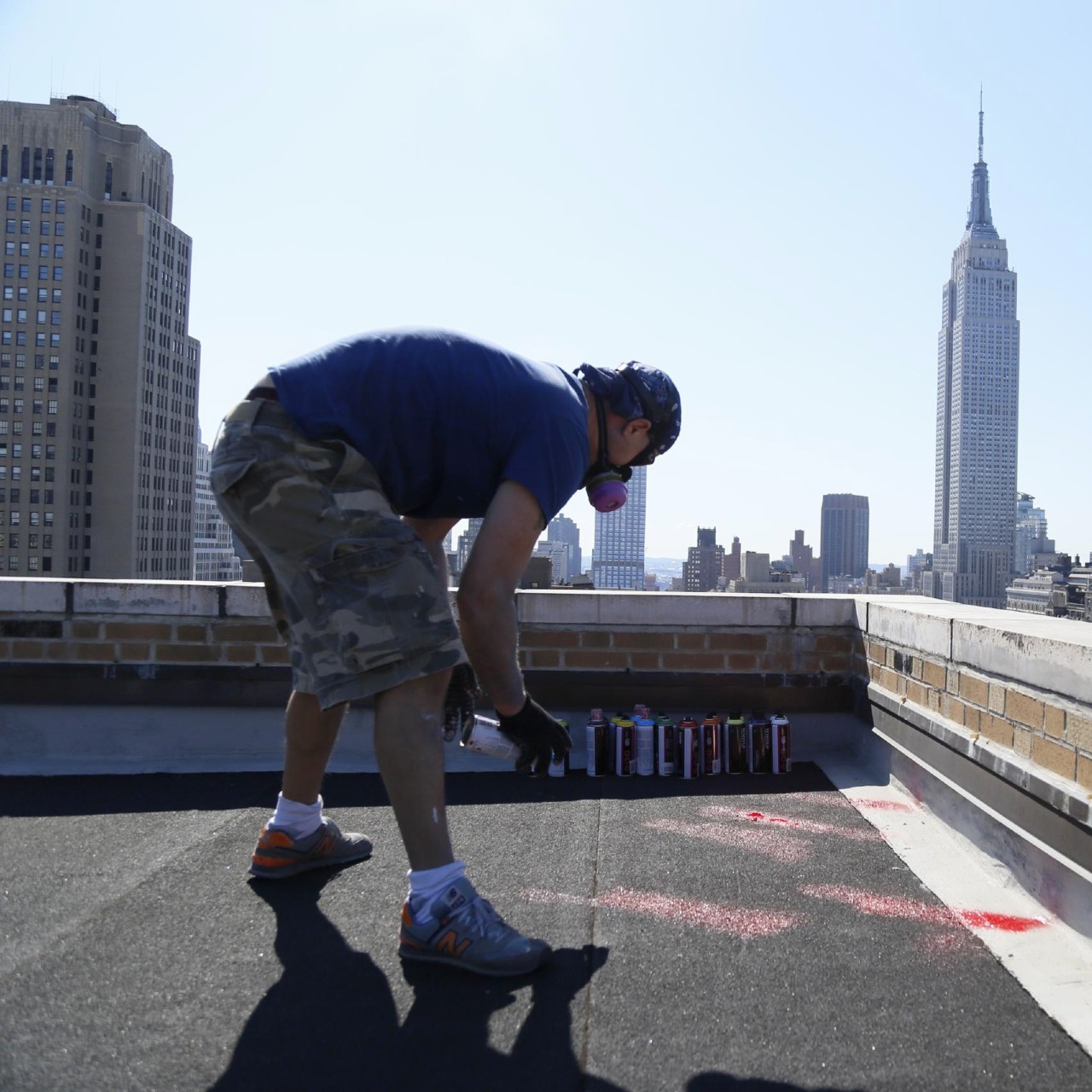 How does a native New Yorker perceive the city? What does it take to keep your inner child? How can art make you happy? Fine Art Shippers took the opportunity to speak with our longtime friend Mitchell Schorr, one of the best-known urban muralists in the United States and internationally.

Mitchell Schorr’s signature series, “Da Race”, has been painted at over 150 locations worldwide. It was inspired by his famous painting Ice Cream Truck painting “Dripy,” which was acquired by the Detroit Institute of Arts and is shown as part of its permanent collection. In 2015, he created a “Da Race” mural live in Hong Kong. This was followed two years later by a live staging at Rockefeller Center to celebrate Ferrari’s 70th anniversary, for which Fine Art Shippers was selected as the art logistics company.

And of course, Fine Art Shippers is proud and happy to have Mitchell’s work literally always at our fingertips, painted on our delivery truck.

As a native New Yorker, how do you perceive this city? What would you like to change about it with your art?

Mitchell Schorr: I perceive New York as a growing, changing organism: it’s alive, it’s constantly changing, from the buildings to the art, from the food to the street life. And when I bring my art to the street, I hope I can make someone happy who was not expecting it.

How has New York changed compared to when you were a kid?

It has gone through so many changes. When I was a kid, it was really a different place. There were not as many people living in New York City. There were no crowds at all. Depending on where you were, you were afraid to go to other parts of the city. I think that’s still the case today, but not nearly as much as it used to be. Currently, there is a homeless problem, which there used to be, but it was different. Nowadays, there is so much money in New York City. There are so many changes that things you might remember from five years ago might be gone today. 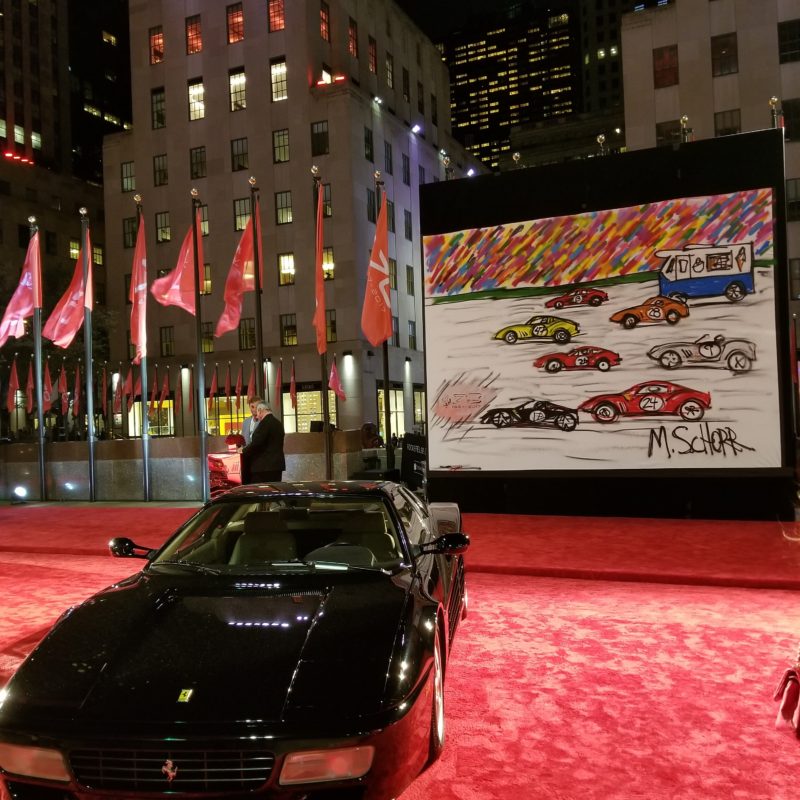 Your art is so full of vital energy and life. The imagery you use connects the people who see them to their inner child. How would you describe the inner child of urban artist Mitchell Schorr?

The most important quality of any child is the ability to feel happy and have fun. My inner child wants to have a good time without being interrupted by bad vibes. I want everyone to live that way. I like to think that people who walk by and come across my art suddenly feel better and more carefree. I often hear that my art makes people smile. And the kids really like the ice cream trucks because they can relate to these things. That’s what counts for me.

How do you go about creating street art in other countries? How do you fit it into a different cultural context?

For example, when I did a show in Hong Kong, I painted some of the cars you see on the streets, like the cabs and things like that. I also did a painting of the race there. So I am bringing my stuff to the streets of the city. But other than that, the space I paint becomes its own environment. I do not worry much about the connection because it belongs everywhere – people do connect to my work when they see it.

In your previous interviews, you mentioned that you admire Keith Haring. What do you love about his art?

A lot of his early work, especially the street paintings, was all about fun and energy. I think the radiant baby he painted expresses the energy of childhood, which I love so much. Over time he became more political, but still, his works were about that vital force.

Oh, there are so many artists I like. For instance, I am a big fan of Lucien Freud. I love his thick brushstrokes and the expressiveness of his paintings. 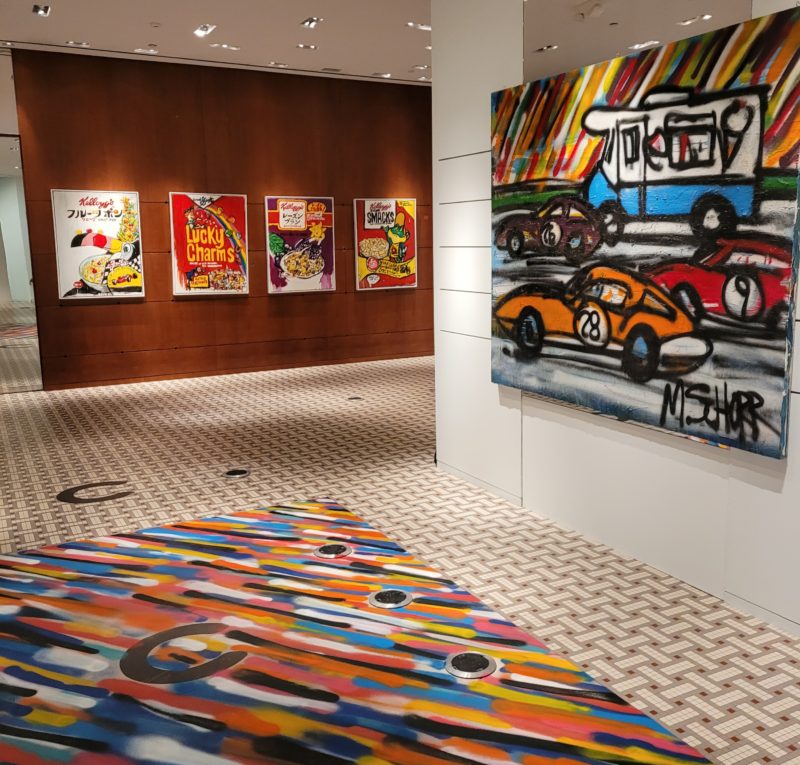 You make both street art and studio art. How do your approaches differ in each case?

Although the subject matter is different, the overall feeling I try to put through everything is energy and movement. Even if it’s a static image, I convey motion through the paint and the way it’s applied.

As for my studio art, I am currently doing a series of paintings of cereal boxes from around the world. When I was a kid, I was only allowed to eat certain types of cereal. That got me thinking that maybe other people around the world have had the same experience. I also work on abstract paintings. Whatever I do, I try to connect them all in one way or another.

You have recurrently worked with Fine Art Shippers. Which was your best experience?

The biggest project we did together was delivering my artwork to the Rainbow Room at Rockefeller Center, where there was a big event celebrating Ferrari’s 70th anniversary. I also painted the truck they use as a delivery truck. That was a fun experience. I get pictures all the time from people who see it.

When it comes to shipping your work, what special requirements do you have for packaging and transportation?

I usually leave that up to Fine Art Shippers’ team. They are really good at taking care of those things.