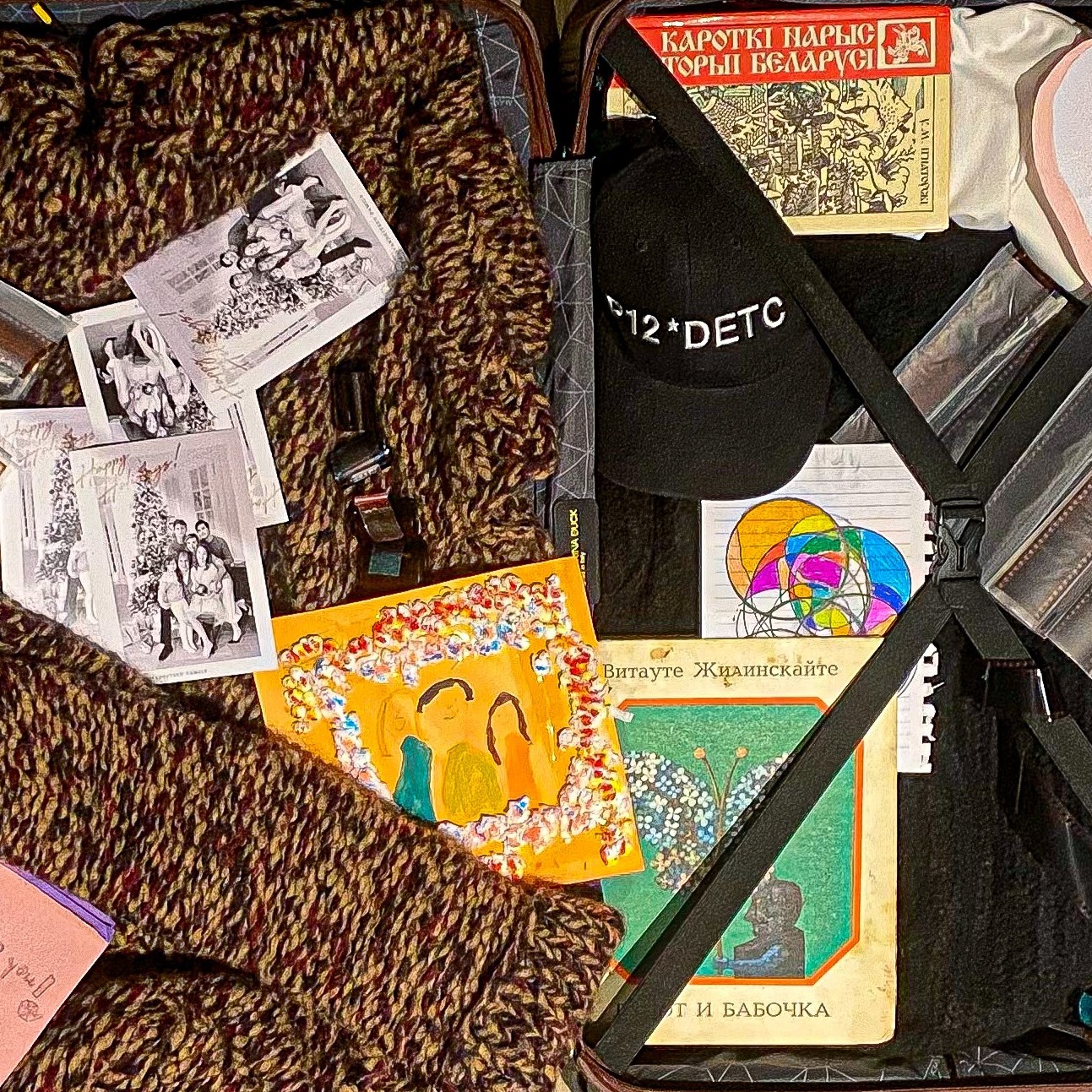 The world of art is interesting because its works and authors use the language of visual images to play on our feelings, evoke memories, make people think, and take them to the depths of their memory. Art pieces that have the power of such an impact are also of the greatest value.

The 21st century is a time of movement of large groups of people, an amazing mixture of cultures and nations, which, of course, is reflected in the work of artists. Today, we will tell you about the artist Maria Gvardeitseva, amazing in strength and depth of work, whose exhibition recently opened at the London Coningsby Gallery in the thriving area of Fitzrovia, right in the heart of London’s cultural West End.

Maria Gvardeitseva is a multi-disciplinary visual artist born in Minsk, Belarus. She now lives in London where she studies to get her MA in Art and Politics at Goldsmiths, University of London.

Maria Gvardeitseva was selected to represent Belarus at the 59th Venice Biennale for the national Pavilion in 2022. However, her candidacy was rejected for political reasons. She was also forbidden to exhibit in her homeland. But for a true artist, life without creativity is impossible. And Maria decided to move on to a new professional stage, having received a serious education in the direction of art that seems important to her. 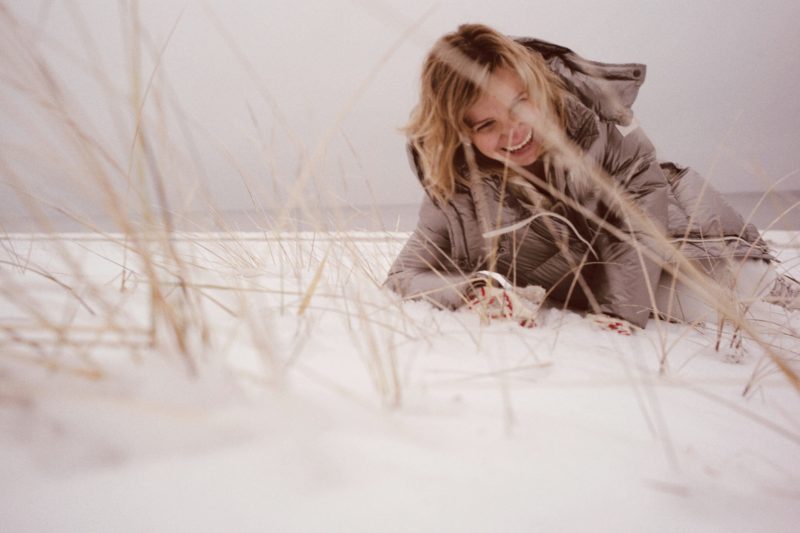 Let’s look at Maria’s new exhibition and the ideas behind it. Since Roman times, exile has sometimes been seen as an alternative to the death penalty. For centuries, the separation of a person from their roots and community was considered the most terrible punishment. Indeed, the connection with the place of birth of a person is an integral part of their identity. The mosaic of objects and our past, as well as important life events, determines self-identification. These memories remain precious throughout our existence. We store them and carry them wherever we go. 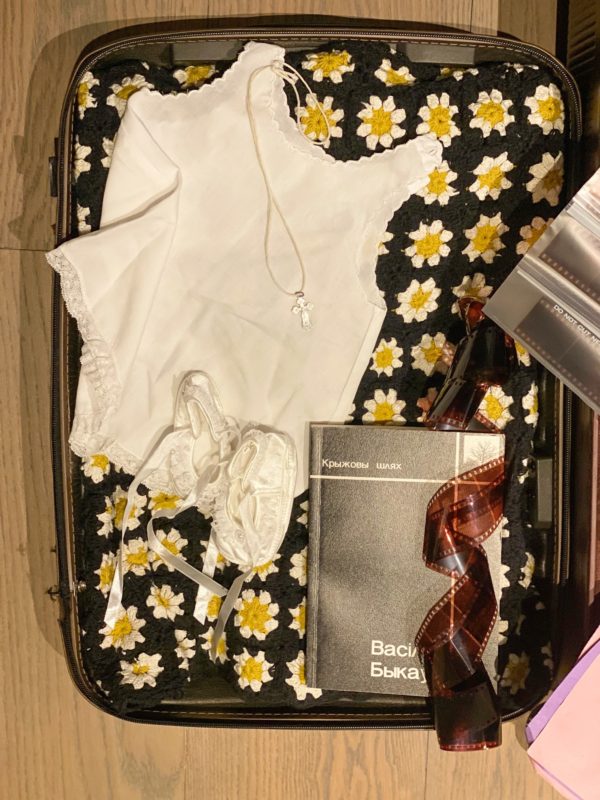 The main part of the exposition is an installation in the form of two suitcases filled with things that the artist took with her when she left Belarus forever: Yanka Kupala’s books, a photo album, her daughter’s baptismal dress, books, objects reminiscent of important moments in Maria’s life. The suitcases are cut in two and shown as an altar, representing the artist’s personal relics. Mary perceives the altar as a place of worship, but also as a refuge, a means of protection.

The central installation is supported by a performative video piece showing Maria burning her Belarusian passport in the forest on the Belarusian border. If you go further, you will see suspended translucent canvases with blurred old photographs of Minsk, which complement the context of the installation like memories of the distant past.

The exhibition continues with Anatomy of Citizenship, an installation of several jars with pieces of Maria’s Belarusian passport immersed in formaldehyde. This installation emphasizes the artificiality and formality of the documents. The artist utilizes the dissection mechanism used in anatomical studies. Maria separates and studies each element separately to recognize the limits of state and national belonging in a person’s personality.

It is incredibly interesting from an anthropological point of view how the very arrangement of the elements of the installation follows the canons of the image arrangement in the altar in the Orthodox Christian religious tradition, with touching worship and respect for simple, but incredibly valuable family heirlooms.

Traveling the world, especially when it happens by force, we become vulnerable, eternal nomads; we read situations, and we understand without words what it is to integrate into a new community and build a life from scratch. This is the art storytelling of the 21st century… 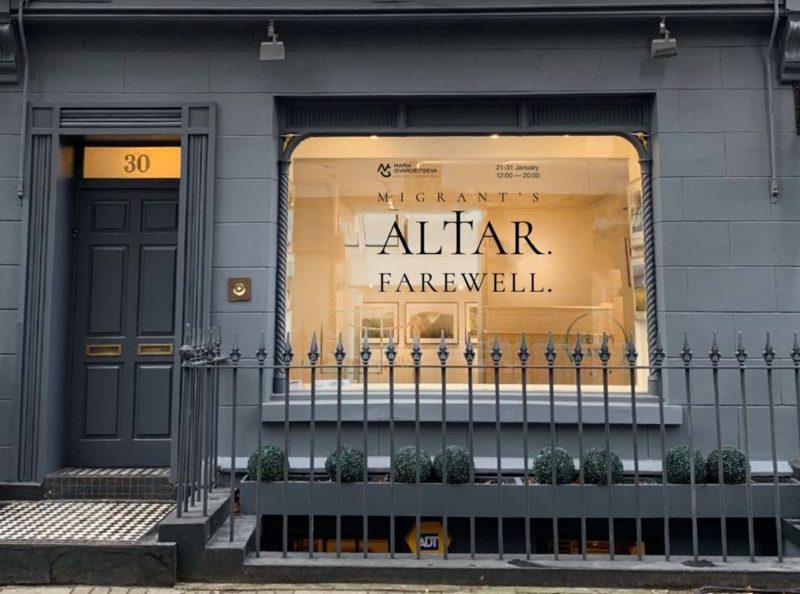 More information about the artist, you can find here: