All Important Antique Russian Icons in a Single Book

RussianIcon.com, a leading online gallery for antique Russian icon dealing, has recently presented a unique project developed in collaboration with the Museum of Russian Icon, the largest private museum of the Orthodox Christian Art in Russia. The world’s best specialists proficient in religious icon art spent two years working together with renowned art collectors and historians to write an exhaustive book that has become a compilation of all their knowledge about some of the most important examples of antique Russian icons. The result has surpassed all expectations, becoming a somewhat guide to an outstanding collection of museum-quality icons brought together over several decades.

This amazing book includes a detailed description, history, and explanation of many antique Russian icons painted in the most notable iconographic regions of Russia (including Palekh, Kholuy, and Mstyora) in the 18th – 19th centuries. Each of them is distinguished by its own recognizable style, which is clearly seen in the high-resolution images.

The highlight of the described collection is a series of first-class antique icons dedicated to The Resurrection – The Harrowing of Hades, one of the most beloved subjects among Orthodox Christian believers. It is also worth noting that many of the Russian icons included in the book are complemented by major Church Feasts, bringing together all of the significant events of the Gospel narrative on a single panel, which makes them especially important for collectors and connoisseurs of religious icon art. Such icons, which are often called “full-cycle icons,” were mainly painted by Palekh iconographers known for their distinctive architectural shapes and highly emotional “miniature” style of painting.

In addition to The Resurrection – The Harrowing of Hades icons, the book also includes several fantastic examples of the Menaion icons depicting the saints and the feast days for every month in chronological order, starting from the 1st of September. Such hand-painted icons became highly popular in Russia in the second half of the 16th century, especially among Palekh iconographers. For today, due to their rarity and uniqueness, the Menaion icons are some of the most desired by both the Russian Orthodox faithful and the collectors of religious icon art. 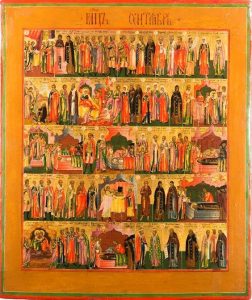 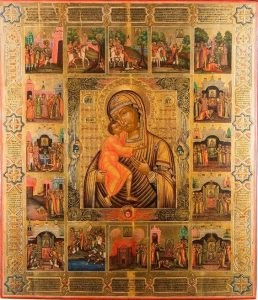 In general, the book introduced by RussianIcon.com and the Museum of Russian Icon perfectly reflects the remarkable stylistic variance of Russian iconography of the 18th – 19th centuries, making it a must-have for any connoisseur of religious icon art.