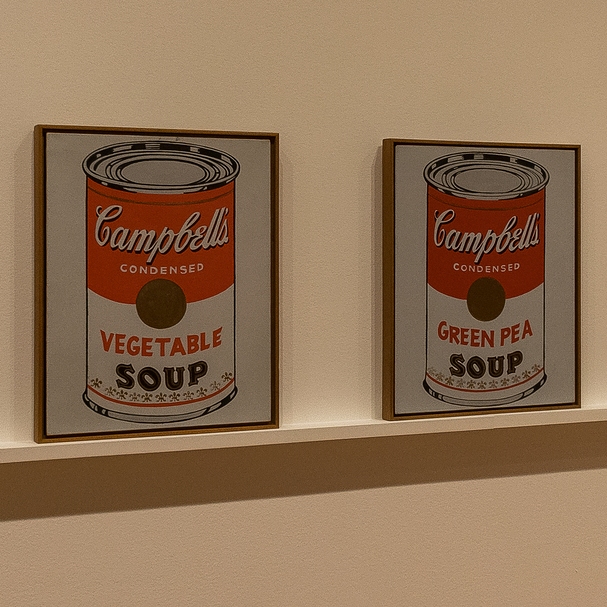 Although Pop Art is an international art movement that first emerged in Britain in the mid-1950s, it is most associated with New York of the late 1950s – early 1960s, largely due to the work of such artists as Andy Warhol, James Rosenquist, Claes Oldenburg, and Roy Lichtenstein. It is no wonder that the best New York museums of modern art, including the Whitney and MoMA, feature some of the most significant examples of Pop Art in their art collections. If you have never seen these unusual paintings and large sculptures inspired by popular culture and mass media, it’s high time to fix it!

This famous piece of Pop Art, which made this movement a household name, was created by Andy Warhol in 1962. It consists of 32 paintings depicting Campbell’s soup cans with different flavors in the same way they could be found on a supermarket shelf at that time, which makes no distinction between printed advertisements and fine art. This important work is now exhibited at the Museum of Modern Art.

Claes Oldenburg became famous for mixing his art with foodstuffs and household items, which gave fresh impetus to the development of the Pop Art movement. The “Soft Dormeyer Mixer” is a perfect example of the artist’s work, which represents a huge eggbeater sewn out of vinyl and stuffed with kapok. This piece of soft large sculptures belongs to the art collection of the Whitney Museum of American Art.

Inspired by mural-scaled paintings and advertising billboards, “F-111” was created by James Rosenquist in 1964-1965. Combining different images of products (spaghetti, tires, light bulbs, etc.) with the panorama of Cold War paranoia, this work defined the artist’s singular contribution to Pop Art in the US. The set of the large-scale “F-111” paintings designed to fill the four walls of a room now belongs to the Museum of Modern Art.

Roy Lichtenstein is one of the most influential artists of the Pop Art movement. Inspired by comic books, his paintings with dynamic composition and distinctive manually-simulated Ben-Day dots are now being sold for millions of dollars. The “Drowning Girl” that was created in 1963 is one of the artist’s early paintings based on the DC’s “Run for Love!” comic book. It is currently on view at the Museum of Modern Art.

“Accumulation No. 1” by Yayoi Kusama

Yayoi Kusama is now one of the most expensive living female artists, whose works are easily recognizable by amorphous large sculptures, signature polka dots, and incredible mirrored “Infinity Rooms.” However, “Accumulation No. 1” got bitter criticism from art critics when it was first exhibited in New York in 1962. Today, this unusual ‘armchair’ made from hundreds of phallic bulges is considered one of the best examples of Pop Art. The work belongs to the art collection of the Museum of Modern Art.